Started as a rock drummer in 1975, but from the early 1980s it is the Balkan music and the Middle Eastern music that characterize Lars Bo Kujahn.

When he forms the group Kefir (with Claus Mathiesen), the name is later changed to Svira. The orchestra tour in Macedonia in 1988.

Autumn 1988 becomes a landmark with a study trip to Istanbul and Cairo to study Middle Eastern percussion (supported by the State Music Council and DJBFA).

At the Conservatory of Istanbul v. Ferruh Yarkin, Lars Bo Kujahn receives tuition in Turkish rhythms and in Cairo with Professor Mahmood Hamoda.

Since then, it has turned many trips back and forth to Cairo.

In 1991, Lars Bo Kujahn publishes the book "Oriental Percussion" (incl.MC) at the Percussion Center publisher. This was the beginning to give workshops in "Oriental Percussion" all over Scandinavia, among other things. Falun (S), Kuopio, Helsinki, Tampere, Turko, Jüvasküla (F), Oslo (N), Stockholm (S) Vestjyllands Højskole etc. Has also had a few study trips to New York and Morocco respectively.

All study trips until -93 were supported by the Danish State Music Council and D.J.B.F.A.

Since 1993, Lars Bo Kujahn has also expanded his instrument repertoire with the Arabic "piano" "Qanoon", which he with the support of D.J.B.F.A. has studied in Cairo and Tunis.

2009: Studio musician on several projects including Pharfar, Opgang 2, Bent F Bjerre and others.

LBK is currently active as both a musician and a composer in the following contexts: 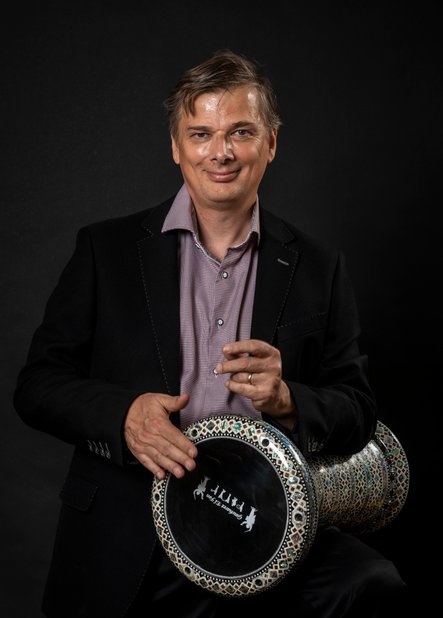